I’m a big fan of Uncharted and I wish we had an action adventure game of that ilk. We’ve started some, and we’ve looked at them. But we don’t have one today of that quality. This is an opportunity.

Review: Uncharted 2: Among Thieves is my favourite game of all-time. I’ve beaten it 4 times. That said, I didn’t need to play a reskinned version. I’m sure you readers are familiar with the law of diminishing returns: productive processes, adding more of one factor of production, while holding all others constant (“ceteris paribus“), will at some point yield lower incremental per-unit returns.¹ In other words doing the same thing has lesser value each time it is repeated.

Rise of the Tomb Raider isn’t the exact same game as the aforementioned, but enough elements bear repeating so much that the game feels like a bland copy, pale imitation. Whereas its predecessor, simply titled Tomb Raider (2013) was Uncharted influenced, the ideas story-wise at least are repetitive and uninteresting. You have a shadowy militia-group with an infinite number of foes, an icy ancient fortress guarded by warriors (who only seem like an afterthought of enemy variety) passive non-direct references to the previous game which carry no actual weight, a mysterious mythic treasure that is not what it appears, and a few slight twists and betrayals that feel all but expected afterwards. The game even fakes a character death in the same way. Seriously get original guys. That last bit actually isn’t entirely fair: The lead writer, actor and supporting characters are female.

Whatever happened to the weighty original angle Crystal Dynamics were pursuing about Lara Croft suffering from PTSD due to the traumatic events from the first game? That would have been different, new and interesting. I can comment that in this position Lara Croft seems more of a maniac than Nathan Drake, considering the brutality of her kills her lack of quips and less of a fixed interest on the tombs she is raiding than those she is trying to stop.

I cannot comment much on the art direction since playing on the last-gen console version saw a pared down version with less textures and lighting techniques. I will say that developer Nixxes has done a great job getting the game to run almost completely smoothly with hardly a glitch in sight. The only one I encountered was after I completed the main game in a glacier I passed near a camp the second time. Above all this is a very well done port but I suspect it will be the last one I play for a while since with Battlefield I feel I am actually missing an important enough component of the visual experience and not getting enough of the intended experience. There are gorgeous skyboxes and sunsets and the occasional graphical flourishes, the rest is put on character animations and textures which look and move dynamite. I do feel spoiled being able to play this game on a 10 year old console. 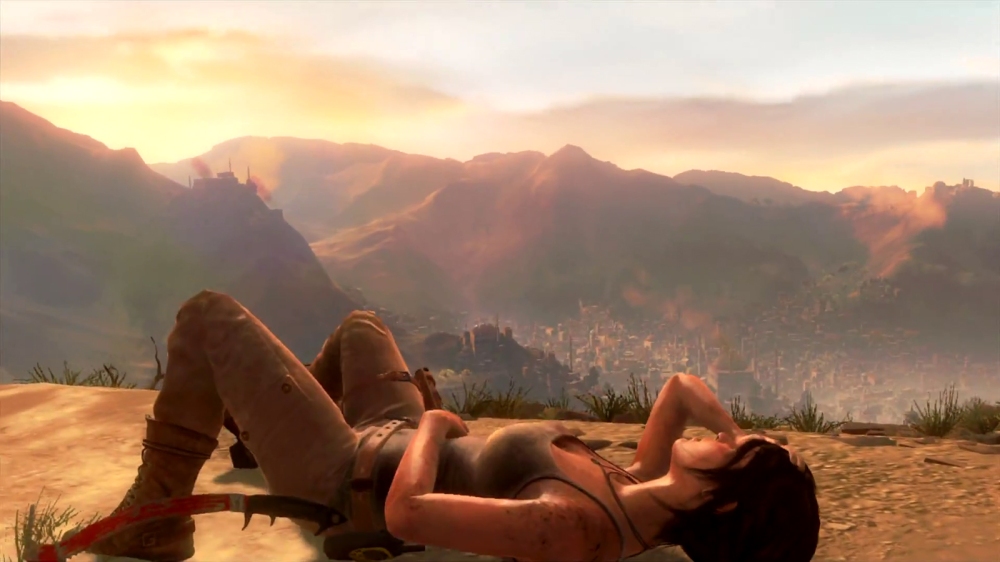 Rise of the Tomb Raider falls just a bit short of its predecessor.

Fortunately, as the only game I’ve bought this year, Rise of the Tomb Raider makes up for its $60 price with a long well designed gameplay campaign. The upgrade and crafting mechanics are polished and feel very complex in a good way. I am still exploring the game world after completion in full gear and still haven’t mastered everything. The map design Siberia is a bit more disjointed and disorienting compared to the fun to explore Yamatai Island from the first game. Again similar concept to Uncharted 1-2. Although the second one had grace and flowed into the story, here I can’t help but think the hub levels were randomly copy edited and pasted together as they don’t quite compliment each other.

Furthermore there is less repetition and greater variety in this game than the last. There’s a reason for hunting and great use of verticality. And although there isn’t much going on in the way of deepening Lara’s character or origin she does earn her badass crown a lot more this time around, opting to shoot first rather than ask questions in tedium as game characters are won’t to do. On top of all of that she’s dressed for the part, if only her style wasn’t ripped so rigorously from someone else.