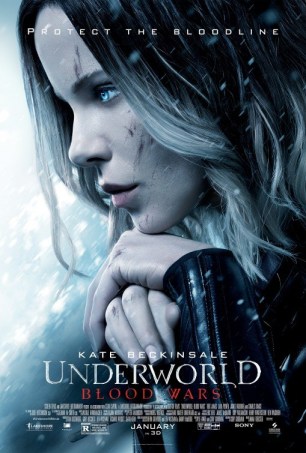 Plot: Underworld: Blood Wars is the fifth instalment of the Underworld series. The movie stars Kate Beckinsale as Selene, Theo James as David who together are on the run from exile from both Vampires and Lycan kind and plan to use Selene’s and her daughter’s blood to turn the tide on the war. Together they ban together to help end the war between the two races and an inevitable extinction of the Vampires. Seeking the help from the northern vampire coven, Selene gets mystical powers and becomes a serious threat to the Lycans prior to the final fight to defend the last Vampire stronghold in the East.

Review: As the fifth installment to the series, this movie continues the overarching storyline that continues the war. The battle in this movie did not end the feud between species but did bring it closer to an end. As a global rating in the series, I would say that the movie ranks third of five behind the first and third in that order. Blood Wars kept with the pace of the other movies and kept the attention to the series well.

Overall, the movie was fairly well done. The plot was ok, and the fight scenes were very well done. The visual scenery was sunning and the script was well written. I would recommend this movie to those that have enjoyed the other Underworld movies in the series and those who like action and adventure. This movie rates at 7/10

Lord of the Rings in that the Northern Coven of Vampires look like the elves and when a character dies, they come back whiter looking with new-found powers. 47 Ronin because of the mysterious power to travel using spirit magic and Mortal Kombat because there is a scene where Selene rips out someone’s spine through their back in a fight. Also I, Frankenstein for the mashup since it is also a fight between hidden species of Gargoyles and demons. It’s an easy addition as both the Underworld series and I, Frankenstein are stylistically similar, and the latter was influenced by the former.

Be sure to check out the rest of the titles in our most anticipated movies of 2017.