I was struck at the same thought 5 minutes into Spider-Man: Homecoming that I had for Marvel’s Guardians of the Galaxy Vol. 2 two months ago – “Wow! These people really know what they’re doing.” This was a movie I did not want to like, a third reboot for Spider-Man in 15 years and I didn’t think there was room for a new take on the character. I was thankfully wrong.

Homecoming is a perfectly paced, well acted and filmed, with enough school spirit, humour and just straight wit that I’m baffled now the studio has amassed a legendary run of films on par with Disney’s other in-house brand Pixar. Even though I haven’t liked all their films (Captain America 1, Doctor Strange & Thor: The Dark World come to mind) they haven’t phoned it in yet for a movie, and continue to make the right decisions Hollywood usually gets wrong such as wasting a good name actor in a villain role (My biggest presumption for this movie) Decisions like this show not only did a lot of thought go into making a film which could have been easy money, a clear vision despite SIX credited screenwriters emerges as a Hollywood lesson in how to make a blockbuster in 2017. This is easily the third best Spider-Man, maybe even the second, with a few standard caveats. 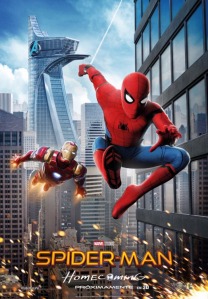 To the opposite of what I predicted years ago, Homecoming operates with a clear inspiration that takes less in creative style from previous Marvel films and moreso from high school Disney channel shows. It annoys me the big inspiration everyone tossing around is John Hughes much to Disney’s delight because I believe it is only surface level attention and a bit misleading. There are a few direct references to Ferris Bueller and the casting of Hughes alums Michael Keaton (Mr. Mom) and Robert Downey Jr. (Weird Science) help, but the differential between Hughes films and this is that high school problems here don’t actually matter and merely serve as window dressing to a Superhero plotline you might otherwise wonder why it isn’t being handled by Manhattan’s Defenders (Daredevil, Jessica Jones, Luke Cage, Iron Fist) maybe even Doctor Strange (seriously, did anything happen of consequence in that film?). Not even Peter seems to be truly phased by his teenage sized high school problems. (More dwelling on this in Spoiler Section)

The biggest and only major gripe in this otherwise extremely polished film is that the final decision made by Parker doesn’t even seem to fit the broadly defined character we know so far. Throughout the film, Parker seeks to be an Avenger, constantly nagging Tony Stark to go on more missions coded as a ‘Stark Internship’. He skimps on classes, papers and tests, club responsibilities, hanging out with friends and even his crush to no serious consequence. This is lampshaded* by the screenwriters and like most of Spider-Man’s weaknesses mined for great comic relief, but when he makes the decision to forgo becoming a full-time Avenger in order to focus on things the movie has had him completely skip over it feels like a backslide to the character’s natural growth and more a calculable franchise move. Marvel cleverly disguises this in fan service to create the friendly neighbourhood Spider-Man audiences know and love but it taxes on the MCU.

Franchise maintenance is on display but the film is still sleek. The series usual long running time is put to good use making sure nothing is shoehorned in gently laying in everything that is either funny, exciting or builds up the mythology. There’s even room for a few great surprises. Tom Holland makes for a very physically capable Spider-Man and though his Peter Parker high school persona is all over the map, his friend Ned and classmates Michelle, Liz and even Flash all have enough personality to offset that lack of character. It is even weird to finally see actors who look like actual high schoolers. As a bonus, the placing of Parker in high school doubles the coming of age theme since this is someone who is still figuring out who they are both as a hero (the movie has fun with Spidey figuring out his fancy Stark tech suit) and as a boy. So all the times the series juggled a crowded canvas in the 3rd film and Amazing 2 here Spider-Man comes across as justifiable and maturely sophisticated.