This was one of Arclas’ picks which I caught on the Movie Network recently a few weeks ago. Based on a Daniel Clowes graphic novel, author of Ghost World and Art School Confidential a few supporters of his previous adaptations were disappointed the helmer of those Terry Zwigoff wasn’t involved in directing this one, instead leaving it to The Skeleton Twins director Craig Johnson I can’t speak to the consistency of translation with past iterations but I will say the slow paced Wilson is watchable thanks to a reliably good performance from Woody Harrelson whose cheery attitude gets you to tolerate his loser behaviour. Laura Dern is a good pairing and I don’t always like them both but the story does take some unpredictable turns. If you were to watch it I’d recommend a Sunday afternoon movie while your folding laundry.

This movie was snapped up by a new distributor: Smith Global Media and is expected to be released in Q2 2018.

I saw the divisive film in theatres and liked it enough. Then again I enjoyed Prometheus however disappointing for what it was. I was expecting a bridge between that film and Alien, was treated to some pseudo-skimming philosophy a few decent performances. I was entertained for what I was expecting despite a predictable final twist. I do hope Ridley Scott completes the third part of his prequel trilogy sometime, perhaps then can the series be put to an appropriate rest.

Pirates of the Caribbean: Dead Men Tell No Tales

I had high hopes for a new installment which got a new writer and fresh directors on board and brought on Javier Bardem who usually makes for a good villain (Collateral, No Country For Old Men, Skyfall). Unfortunately I would tie this with Baywatch as the worst movie of the year. There are no new ideas in this dead franchise, the jokes aren’t funny, it still runs too long and Johnny Depp outside of entertaining sick kids at hospitals needs to pack it in. It doesn’t look like anybody in this franchise really cares anymore. 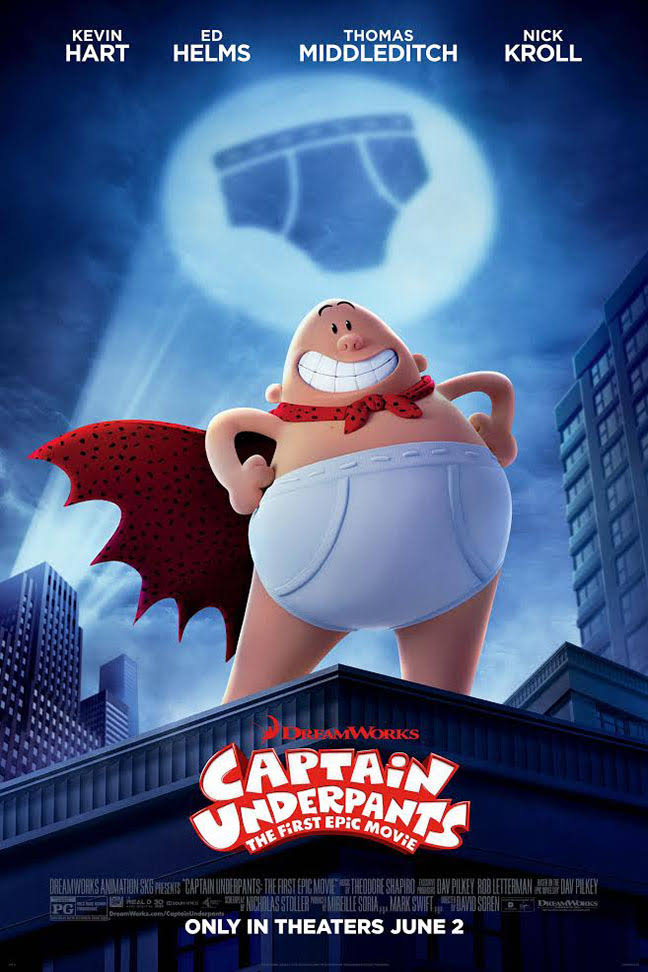 Another one of Arclas’ picks. I recently saw it, all I can say is I went in with low expectations and was slightly surprised. These books were around when I was in elementary school and the humour is dutifully recreated. The animation style is clean and its reviews signalled good will. The other critics are right, it can be exhausting even on a short running time, but there are laughs and its overall message is unique as well when it changes animation styles and encourages viewers to read books. The same screenwriter who brought us Storks, and wrote and directed Neighbors and its sequel, I’ll caught it Free on Demand. I can say its something to watch.

Arclas’ pick. Did not bother to see it.

The premise of this is so ridiculous somebody should see it, it could be very entertaining. [https://www.youtube.com/watch?v=NG2utrMwTyY]

I did not expect to see this in theatres but cheap Tuesday came along and I said why not? I was treated to the best fight scene of the year next to the Mayweather-McGregor fight just after the opening credits roll, Matthew Vaughn turns up his action-packed instincts to 11. If only the rest of the film held that well. There are parts of the film that are inspired particularly the addition of Elton John but nothing as fresh or as interesting as the first film. If there’s a third film, my hope is that Matthew Vaughn brings us more of the unexpected or gives us much less time to think.

This was my favourite film of the year and I hope it is as richly rewarded in awards season as its textured images present. 10/10 It takes its time getting to the point but it is worth the wait. A much better film than the original (which I don’t like) and much more accomodating to fans than The Last Jedi. If only this movie had been seen by as many as that one.

An okay movie that should have been so much more, as someone only vaguely familiar with the source material it enticed me to know more. To more ardent fans however it was derided and called the worst. At least it wasn’t as boring as the Ghost in the Shell, the other anime adaptation this year. Netflix was very happy with the adaptation and work on a sequel, intended to be apart of a trilogy (SURE like everything these days) has begun. It’s another dent in director Adam Wingard’s genre reputation after delivering the beloved You’re Next and The Guest and stumbling with Blair Witch. It is not the best Netflix film but at least its not the worst. Here’s hoping the New Year will be a creative point for streaming platforms.