Fans faith of the most popular show on earth was shaken as quality wise the writing quality on Game of Thrones has dipped significantly as its endgame comes into focus. The source of the problem according to fans and reviews seems to rest entirely on the writer/ creators David Benioff & D.B. Weiss. Game of Thrones is remarkably the first show they have ever created, but no one seemed to question that en masse until last week when a character who has been framed as a sympathetic antagonist since the outset quickly discarded all of the good will they had built up with audiences over the last 9 years.

It’s the second major mistake (third if you count the visually impaired third episode from this season “The Long Night”) the creators had made in the series following Jamie Lannister’s random rape of his twin sister Cersei. An encounter that was consensual in the book series A Song of Ice and Fire upon which it is based. That similar heel turn from a much beloved character traded character credibility for shock value, but on a fantasy show unlike any other that includes blood magic and dragons that line can often be blurry. That is until now. 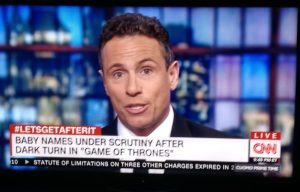 Woe to whoever in the world named their baby Khaleesi, a title bestowed upon beautifully blonde babyface Daenerys Targaryen (the show’s villain, although her journey is kept separate from the majority of the characters until the final 13 episodes when her seemingly major threats have mostly been extinguished.) The title Khaleesi is based off the fake Dothraki language, a patriarchal race of savages and barbarians who know only violence, the most famous of which was chieftan Khal Drogo played by current Aquaman Jason Momoa. Khal is his title, a Khaleesi is his wife. Daenerys Targaryen has a list of additional titles: Mother of Dragons, Queen of Mereen, The Breaker of Chains, Queen of the Andalls and the First Men, and The Unburnt. So Khaleesi as she is affectionately called by a sympathetic characters would be solid if it didn’t mean Dothraki Housewife.

The penultimate episode “The Bells” is not the worst episode of the series because it’s out of character. Lack of motivation wasn’t an issue, it was the execution. With two hours left in a seventy-three hour series, such a jarring move cements the creator strategy as being less geared on the carefully layered reveals of its source material and moreso cultural shock value. While other seasons have had a 10 episode polish, these last two have been rushed and compounded the worst problems of the series previously unseen.

Can the show still stick the landing? I have hope, I am an optimist. A funny fit for this show. I like many have questioned the plot armor surrounding major characters used on less remarkable shows. Do they have the guts to kill the most popular: Tyrion Lannister (Peter Dinklage winner of several of the show’s Emmys) or the hero Jon Snow? Would doing so be too little too late? I think not. The ability to turn the harsh views against this season around which have held a controversy in almost every recent episode hinges on the team doing what they have previously done worst- well. Execution. From another perspective, executions are something the show can do very well. They may not have ventured well beyond original author George R.R. Martin’s works, but on the bright side they do not need to venture further. They just need to stop at the right pace.

Is the wheel broken or do the Game of Thrones keep spinning?