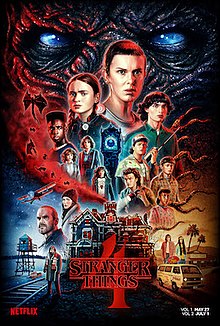 Plot – 9 months after Season 3, the Hawkins crew face a new supernatural threat known as Vecna. Meanwhile, Joyce and Murray try to help Hopper escape from a Russian prison where he prepares to fight an unknown monster.

When several teenagers are killed in mysterious ways. Eddie, the leader of a Dungeons & Dragons group that Dustin and his friends have joined, becomes the prime suspect and is hunted down by Jason and members of the athletic teams at school.

Review – Stranger Things is beyond the curve. It is not as good as it was. And it might all be downhill from here. Although it has the tools to deliver a satisfying final two episodes, the finely crafted pace of earlier seasons is gone in service of bloat justifying its $30 million an episode price tag.

Watching its 4th episode I was reminded of the beginning of the end of Game of Thrones. When the show was bigger than ever but emptying of ideas. Unlike GoT creators, Matt and Ross Duffer are writing their own stories (and also have allowed women into the writer’s room). In Season 4 the show introduces more characters than ever but doesn’t manage to dispense with them when needed. It appears the writers did not spend the extra time during the pandemic tightening their scripts. Yet for the first half of the volume, the show is as confident as ever. After episode 4 however, the threat level is reduced and things start to drag.

If peak TV has taught audiences anything it is to expect results from your characters and Stranger Things lives and dies on its character pairings. Once it backs down from its take no prisoners Nightmare on Elm Street slasher theme the show loses focus. And no amount of chilling backstory can reshape it. At one point, it regresses into a cloying clip reference CW style soap opera. From then on the pace flattens and the audience must endure go nowhere subplots taking place outside of Hawkins, Indiana. David Harbour does what he can to make Hopper’s time in a Russian prison feel like real character development, delivering a strong monologue reminding you he’s a good actor. A California set B plot (C or D even depending on your level pessimism.) has Mike, Will, Jonathan and newcomer Argyle (Eduardo Franco) track down a hacker to locate a kidnapped Eleven. It reminded me how little I like Jonathan and Mike. But the writers must have caught onto this as they aren’t even in the last episode. It’s a shame since Noah Schnapp as Will Byers is one of the best actors in the ensemble and has been underutilized the entire series. Though fans have gone so far as to explain why, the creators simply forgot about him.

There are many other plots that, while making some sort of sense, aren’t efficient and low on character. There’s lots of regression with Joyce for no reason lying to her kids about going to track down Hopper. Hopper spends all 7 episodes waiting for another plot to catch up. Eleven’s plot revolves around trusting the bad guy from season 2. Then spends the other half revisiting an hour-long flashback. Dustin, Steve, Nancy, Robin, Lucas, and newcomer Eddie investigate the history of Hawkins. The show like the blockbusters it models thrive on character moments and interaction. The best we get here is Nancy making eyes at Steve again. For whatever reason, likely COVID, the show struggles to find the humor again.

The character performances are good, and the plotting is functionally good, but with Season 4 the show threatens to collapse under its own weight. A step down from previous seasons, with humour and pacing amiss. For the first time watching these long episodes can feel like busy work. It’s not the fun summer entertainment it once was but it’s still Stranger Things. And still, two more feature-length episodes to go in the season. I’m optimistic, but I hope the show in its final season adopts a week to week strategy, sticks to eight episodes a season under an hour, because things can only get so strange before the audience refuses to accept it.